I’ve never been a fan of E3. It seems dreadfully boring as a concept: pile as many sweaty press attendants into a large room with flashy PowerPoint presentations and PR guys with face mics. What you get is a niche managerial seminar that lasts for days.

Basically, a circle jerk; the unveiling of long awaited games the glistening climax.

In truth, there’s nothing a few internet videos can’t accomplish. But it’s the pomp and ceremony that gets everyone slavering. Slap some professionalism in the form of posterboard and projection screens, and you more or less are standing in the overarching ceiling of a convention center – E3. Can you smell the cheap plastic and body odor?

I had originally compiled a list that would encompass the whole of the E3 experience. Seeing as I have little time to spare on boring pursuits, I decided to focus on some highlights.

The first is Halo 4; the ubiquitous IP from Microsoft. Originally, I had panned the game when it was announced. Now, I hold mixed feelings. 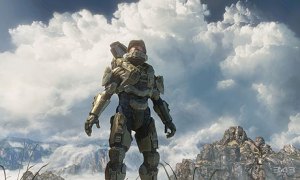 Beam me down a porkchop, and a large order of fries, baby.

With Master Chief “dead”, but not dead (undead?) I had hoped for a zombie Master Chief: a bloated form of the Flood; Master Chief fighting for his humanity, such as it is. I tire of the “hero” archetype. But it’s all about the multiplayer, right? All those 12 year olds calling you a “fag” and telling you to “eat shit and die”. Is this what I’m excited for?

I suppose I should head right on in to Splinter Cell: Blacklist. I’ve tried playing the Splinter Cell games. I am not one for stealth, however. Usually, I bash things to a pulp and leave the finesse to others. My husband is a fan of the series, so I’ve watched him play most of the games. I love Sam Fisher. He is a wonderful character, and probably one of the most underrated BAMF’s out there.

I remember my dad bringing home the first Tomb Raider. Finally, a leading woman his 12 year old daughter could look up to! She had guns, she was a martial artist, she was an archaeologist, and she had…huge tracts of land! 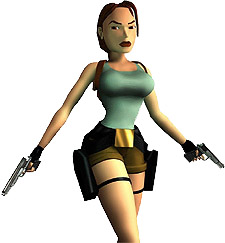 A role model for the ages.

The luster died when he discovered the obvious game demographic was most certainly not 12 year old girls who were in love with Indiana Jones. My disdain for Lara Croft deepened when the loathsome movie of the same name came out a few years later. The femme fatale archetype can only hold my attention for so long. Samus did it well. But then, the attention wasn’t focused on her boobs. The newest Tomb Raider seems to take things in a different direction. Instead of the sexy belligerent paradigm, we have the damsel in distress. It’s a prequel to the other games, and we finally get to see what Lara Croft was like before she inserted silicone into her breasts. It’s more Resident Evil meets Hunger Games than Tomb Raider, but I suppose we’ll see if it’s any good.

Obviously before she took a trip to the Silicon(e) Valley.

Speaking of even more archetypes, now we have the meatheads; a.k.a. Gears of War: Judgment. I’ll be honest here, I never played Gears of War 3. It was just…you remember that part in Predator when Dutch finally prepared all the traps for the Predator? And then he covered himself in mud to hide his heat signature, held up a torch in the middle of the jungle and yelled, “GRRRRRRRAAAAAAAAAAAAAHHHHH!”? That last moment is how the second game felt. 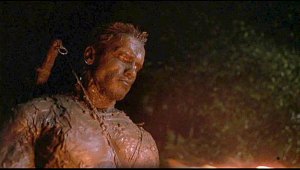 This movie will turn you into a goddamn sexual Tyrannosaurus!

When Dom wasn’t crying about his wife, that is. I heard Gears 3 was more of the same. Now with Judgment, the story focuses on Baird and Cole before the events of the first Gears. Another prequel! And there will be even more jarheads headbutting Wesley Willis style, greeting each other with exclamations of, “IT’S THE COLE TRAIN, BABY!”.

If we are known for one thing in America, it’s our ability to grossly exaggerate things; especially history. After Altair during the Crusades, and Ezio during the Renaissance, I surmised the next step would be Colonial America. I was correct. Assassin’s Creed 3 takes place during the American Revolution. And I couldn’t be more excited. I’m a descendant of a signer of the Declaration of Independence, as well as the great-granddaughter of a full-blooded Cherokee woman. So I was excited to know the main character, Connor, is half-English and half-Mohawk. (Most of) my peoples!

Hey man, you got my tea?

Even more exciting, other than being able to “meet” prominent figures such as George Washington, Thomas Jefferson, and Benjamin Franklin, is being the captain of your own ship! I was delighted to hear they have implemented a real-time weather system that can change your calm seas to roiling depths that threaten to capsize your ship. Thoroughly looking forward to this being released in October. 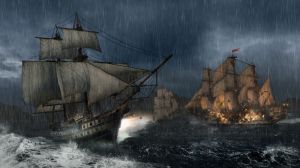 Last, but not least, is Star Wars 1313. There have been a few good Star Wars games. I shouldn’t even have to tell you. You should already know. But in case you didn’t, I’d start with Knights of the Old Republic. The problem I have with Star Wars as I’ve gotten older is how clean the universe feels. With all the perils of the Dark Side, you’d think things would seem a little more…sinister? I get that it needs to appeal to children, but sometimes the grown-ups like to party by ourselves.

Bombs and explosions, or GTFO.

As well, I’m tired of Jedi and Sith. I get it: they shape the universe, but there’s got to be more than just good vs. evil. Our universe, a.k.a. LucasArts, heard our litanies and have given us this boon to mankind. 1313 will star a bounty hunter because bounty hunters are the goddamn best.

“I’m an alcoholic. I…gotta get some hooch, man.”